Parents without cancer are often at a loss about how to talk to those of us with cancer. We are living one of their worst nightmares. Writer Jen Singer wrote this piece after her diagnosis with non-Hodgkins lymphoma. She is a suburban mom of two boys who talk to her through the bathroom door. She was the blogger behind Good Housekeeping's Good Grief! Mom of Tweens blog and the creator of mommasaid.net. You can find her on twitter @JenSinger. Reprinted with permission from Jen Singer. 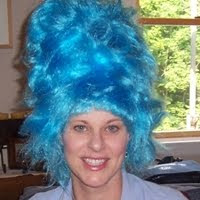 "What do you say to a 40-year-old mom with cancer?" an old friend asked me in an e-mail message the other day. I know she's had trouble dealing with my recent diagnosis of non-Hodgkin's lymphoma, but I was disheartened to find out that she's too scared to even talk to me. After all, I'm still the same old Jen, just bald. Worse though, I feel guilty that I've made her heartsick when even I don't feel that way most of the time.

Her husband, on the other hand, isn't having the same problem. That's why he's one of a dozen contestants in my Wacky Wig Contest, a competition to see who can make me, as he put it, "look as ridiculous as possible during your greatest time of need."

I realize that most people don't normally deal with cancer by taking pictures of themselves in blue Marge Simpson wigs and posting them on the Internet for public viewing, let alone voting, but that's how I've chosen to deal with this tough time. I want to keep as much fun and joy in my life as possible, but how can I give my friend permission to join me when she doesn't even know how to talk to me anymore?

Perhaps she's afraid she'll say something stupid. Take heart, buddy: Someone has beaten you to it. A phlebotomist, who was using a tiny infant needle to draw my blood because that's all that would work on my chemo-battered veins, actually said to me through her chewing gum, "Non-Hodgkin's lymphoma? That's the bad cancer, right?"

You mean there's a "good cancer?" Can I change my order? Oh, that's right, I didn't sign up for this. That's got to be why my old friend has so much anxiety about what to say to me now. Neither of us saw this coming.

It's not normal to be slapped in the face with mortality just months after reaching the unofficial start of middle age. Forty is supposed to be the new 20, not 80. When I got my diagnosis, I didn't know what to say, either. Mostly, I just cried and held my husband's hand.

But since then, I've learned to find the funny and the wonderful in my life's most harrowing time, and I'd like to share that with as many people as possible. I want to make people happy, not heartsick, because, really, that's how I feel most of the time.

So, what do you say to a 40-year-old mom with cancer, dear old friend? The same thing you said when my first baby was born prematurely. Or when I had to put down my sweet 14-year-old cat. Or when I endured several surgeries for endometriosis. Or when my beloved grandmother passed away just shy of her 95th birthday.

You simply say, "I'm here for you." That's all. And the wig? That's optional.
Posted by ChemoPadres at 9:11 AM

ChemoPadres
I am an accidental cancer-patient advocate. My step-brother died from metastatic prostate cancer in November 2007. I was diagnosed with breast cancer in October 2009. I have seen the challenges of treatment, particularly for families. My goal is to have this site be a resource for those families.